Don't Forget to Visit our Shop!

Who said that there were no black panthers in Africa? When the movie black panther was out, I remember that some people were saying that the only black panthers that existed could be only be found in America. Which meant that the movie was not really accurate. But apparently, they were all wrong. An African black leopard has been found in Kenya. And there are beautiful high-quality pictures to prove it.

This comes from the work of a team of biologists who shot rare footage of the magical black African panther after spending months watching and waiting. Nick Pilfold, a global conservation scientist at the San Diego Zoo is a member of that team.

He said that they shot footage of the rare big cat in remote wildlife cameras they’d placed in Laikipia County.
While there have been previous reports of sightings of black leopards in Africa — they’re also known as black panthers — the new images offer important confirmation. “It is likely that black leopards have been living in Kenya all along, it is only that high-quality imagery to confirm it has been missing until now,” said Pilfold.
The black leopard’s sighting was published in the African Journal of Ecology.
Kenya’s Daily Nation newspaper said Tuesday that its photographer, Phoebe Okall, shot an image of a black leopard in 2013 in the same region. It’s unclear whether that image was publicized at the time.
Pilford said he’s “aware of a few different photos taken over the years, but most of them are taken from a distance and could not be used as confirmatory evidence.” The 2013 image in particular, he said, “is a captive black leopard that was brought from America as a kitten to Kenya, not wild.”
“Prior to the observations in our published paper, the last confirmed observation (in the published record) was 1909 in Ethiopia,” he said. 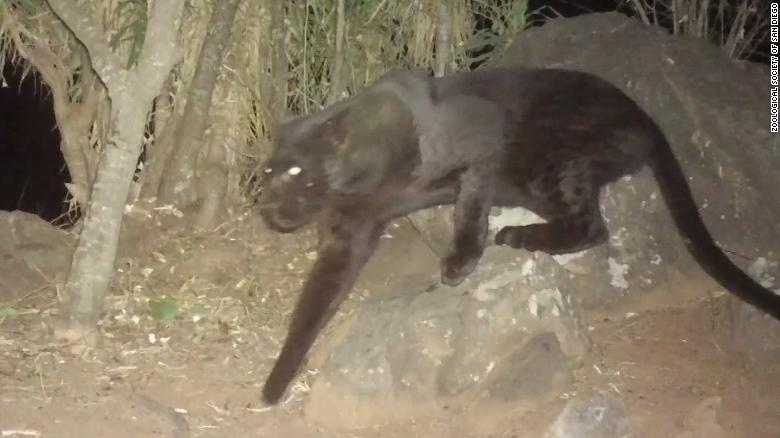 Will Burrard-Lucas shot the images of the black leopard, and described it as his longtime dream to photograph the big cats.

How they captured the footage

The footage shot by Pilfold’s team includes a slew of photos and video footage of the agile animal moving in darkness, its eyes glittering in the night like two shiny marbles.
Pilfold said his team of biologists had placed remote cameras to track the leopard population near a conservancy area in Laikipia County last year when they heard reports of a possible black leopard sighting. “We intensified our camera placement in the area the reports were being made,” he said Tuesday night. “Within a few months, we were rewarded with multiple observations on our cameras.”
While there have been reported sightings, black leopards are still considered rare in the continent, Pilfold said.
The leopard’s coat is pitch black as a result of melanism, a gene mutation that causes an over-production of pigment, said Pilfold. It’s the opposite of albinism — and although the leopard’s coat appears black during the day, its rosette patterns are visible in nighttime infrared imagery.
“Melanism occurs in about 11% of leopards globally, but most of these leopards live in South East Asia,” said Pilfold. 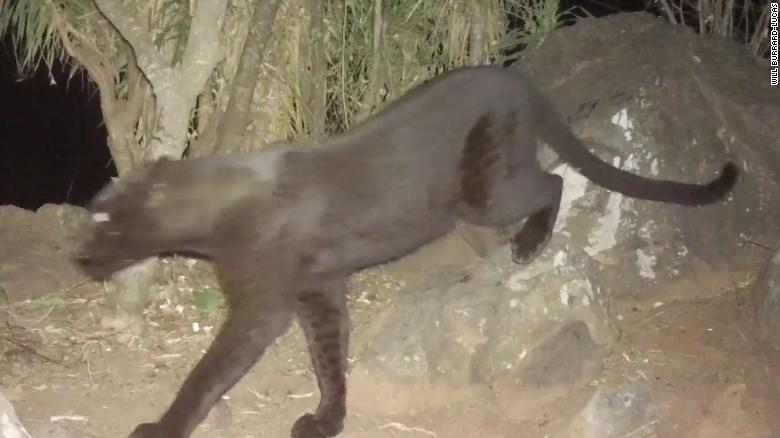 Will Burrard-Lucas shot the images of the black leopard in Laikipia Wilderness Camp.

A longtime dream to photograph the black panther

Will Burrard-Lucas, who shot the images of the black leopard, described his longtime dream to photograph the big cat.
“For me, no animal is shrouded in more mystery, no animal more elusive, and no animal more beautiful,” he posted on his blog. “For many years, they remained the stuff of dreams and of farfetched stories told around the campfire at night. Nobody I knew had ever seen one in the wild and I never thought that I would either.”
Burrard-Lucas said he shot the images at Laikipia Wilderness Camp using a Camtraptions Camera, which focuses on wildlife photography and footage. The cameras were placed near animal trails, and water sources such as pools and natural springs. They were left on 24 hours a day in most places but were only turned on at night in public places, according to the African Journal of Ecology.
Leopards are described as critically endangered on the International Union for Conservation of Nature’s Red List of Threatened Species. 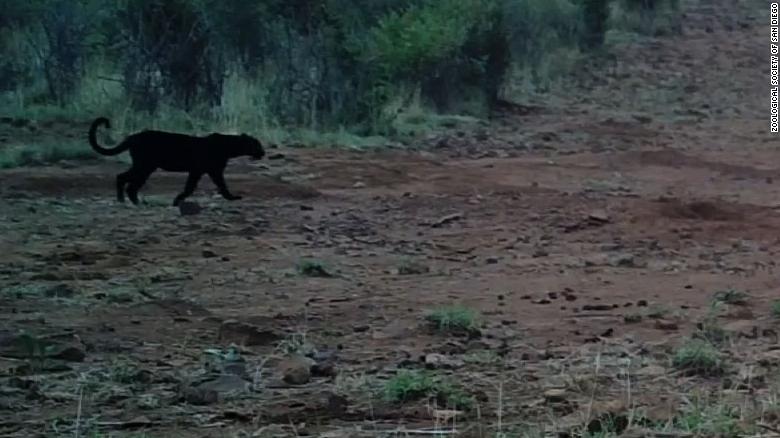 “For me, no animal is shrouded in more mystery, no animal more elusive,” says Will Burrard-Lucas, who shot the images of the black leopard.
The total extent of the animal’s population decline is still unknown, San Diego Zoo said in a statement. But several factors have sharply reduced their numbers, including hunting, habitat loss, competition for prey, and conflict with livestock and farmers.
Pilfold is part of a team from the San Diego Zoo working with local partners, including the Kenya Wildlife Service, to monitor leopard populations in the area and help preserve the species.
He marveled at the coincidence of the location of an animal that’s also called the black panther, the title of one of last year’s biggest movies.
“Coincidentally, our observations are very close to where the fantasy Marvel comic country of Wakanda is suggested to be located,” he said.
Black panthers refer broadly to any melanistic leopard, jaguars and other big cats.

It started in the local community

Ambrose Letolulai, a local leopard conservationist who was part of the project, was speaking with the community as part of efforts to better understand the human wildlife conflict. In one conversation in September, he interviewed an elder who told him about the challenges they were facing with ordinary leopards killing livestock in the region. The elder told him he had seen a black leopard, which he said are known in the Samburu language as “calf killers.” The team then set up a camera trap in that location.
“I first heard about the black leopard when I was growing up from the stories of elders, but I didn’t believe it at all until I saw it myself,” he told CNN. “As a local, people have always been talking about the black leopard.”
Kenyan conservationist Paula Kahumbu said there have been many unconfirmed sightings of black leopards, but this is the first time one has been proven.
“Despite many challenges in the sector, Kenya’s wildlife continues to awe and inspire the world,” Kahumbu said. “I hope that this rare find persuades the authorities that we must balance conservation with development to protect our spectacular and mysterious species.”
Kahumbu congratulated Letoluai for helping spearhead the international project. “I … hope it inspires a new generation of Kenyan wildlife scientists,” she said.
CORRECTION: The story has been updated to correct the spelling of conservationist Ambrose Letoluai’s last name and to update a quote attributed to Letoluai to clarify the source of the information. An earlier version of this story contained a quote incorrectly attributed to Paula Kahumbu. It has been removed.

With our free app, you will have access to posts that are not available on other platforms, and you will be able to meet and chat with the members of our big community. Choose your platform and enjoy.

With our free app, you will have access
to posts that are not available on other platforms, and you will be able to meet and chat with the members of our big community.
Choose your platform and enjoy.

With our free app, you will have
access to posts that aren’t available
on other platforms, and you will be
able to meet and chat with
members of our big community.
Choose your platform and enjoy.