The beautiful one has come is her name. She is so popular that her name became synonymous of Queenship. Nefertiti has alimented many fantasies. From Nazi Germany to Hollywoodian directors, a wave of Egyptomania flooded all media since the 18th century. And it is not going to end soon. That queen represents the epitome of royal beauty for most people today. And most of that hype is based on a bust supposed to represent her face and discovered by Ludwig Borchardt a German archaeologist in 1912. The bust was supposedly discovered in the workshop of a man named Thutmose who lived in the city of Amarna. The beauty of that bust is so uncontested that it even became a symbol for all kinds of women all over the world. The western world appropriated that African historical figure and used it in many industries. The day I saw that the bust was even used by Chinese people for some of their brands, I really understood its importance. The figure of Nefertiti crossed all barriers and became international. But do people realize that it is the face of a black African woman?
I don’t think so. Especially because the image of Nefertiti that most people have, does not express her blackness. The actual face as depicted on that bust and that most people appreciate so much, depicts a woman with features that would not really be considered black or African. And that’s the main reason why in the racist world we are living in, people accept her face so easily. It even became a symbol for Hitler and his Nazi ideology when they started to create the roots of their racist theory about the history of the world. So, how can a black African queen become the symbol of Nazi history that is supposed to promote whiteness as the epitome of beauty? According to many people, it’s because that bust is fake or does not represent the true features of the queen. But is it true or is it just another myth created by “Afrocentrists”?

Many scholars questioned the authenticity of that bust. Among them, there is the great Swiss art historian Henri Stierlin who wrote a book called Le Buste de Nefertiti – une imposture de l’Egyptologie? (The Bust of Nefertiti – a Fraud in Egyptology?) in which he explains why that bust is a fraud. Stierlin claims that Borchardt may have created the bust to test ancient pigments and that when the bust was admired by Prince Johann Georg of Saxony, Borchardt pretended it was genuine, to avoid offending the prince.

In Kemet, eyes were seen as the windows to the soul. And representing a royal figure with one missing eye was seen as a sign of disrespect. According to most specialists, this is the first evidence that the piece is fake. 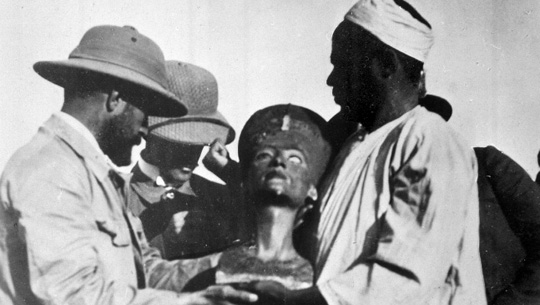 According to Stierlin, there are no scientific records of the bust’s discovery until 11 years after its supposed discovery. Which is quite strange for such a major piece. It could make sense if the piece depicted a random individual but it’s one of the most important queens in world history.

The paint pigments on the statue have been dated and they are ancient. But the inner limestone core has never been dated for some odd reason. According to Stierlin, the pigment used came from Kemet and had been used by the artist to create the bust and legitimize it. 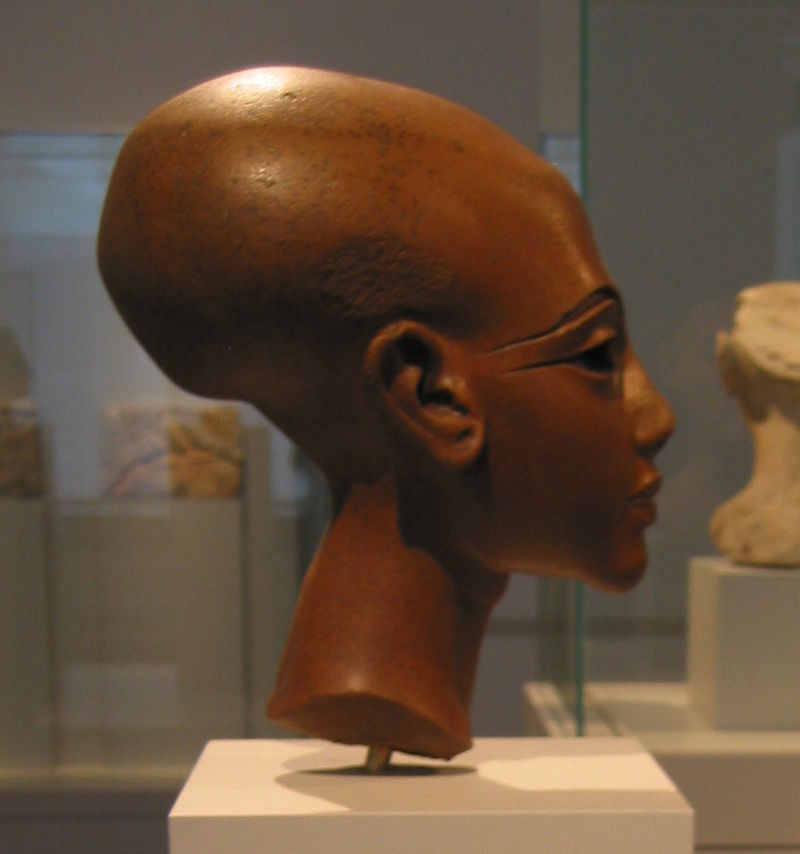 Another problem comes with the beauty canons of Kemet and even in the Amarna period. The bust is completely different from anything that has been created by the artists of that period. It does not match the standards of beauty of the Amarna period. It is more related to the beauty canons of the early 20’s in Europe, the period of its supposed discovery… 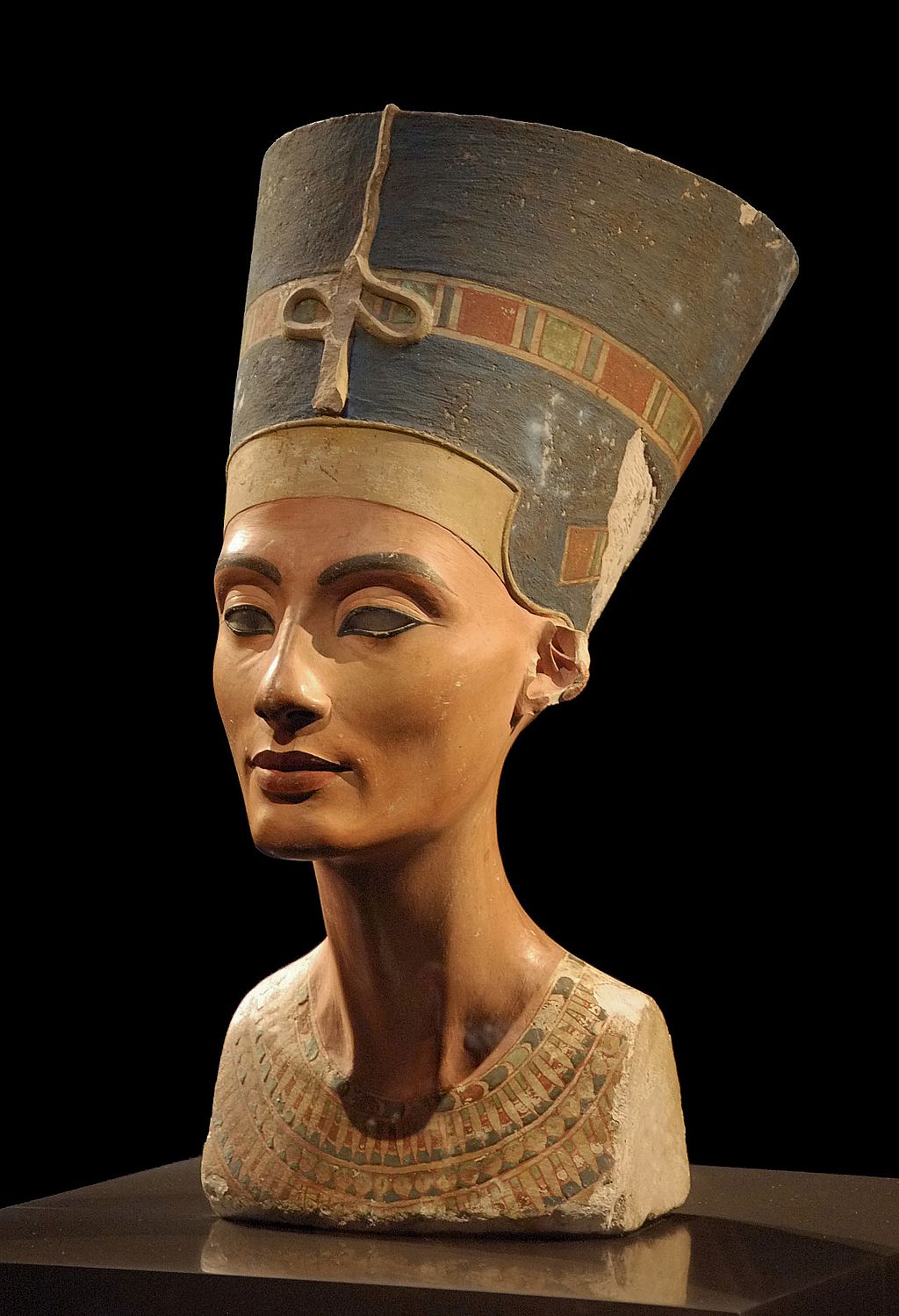 The bust possesses another specificity which is the way its shoulders are cut, the sleeves area. There is absolutely no other piece with such specificity in the art of Kemet, and even in the Amarna art. And while writing this, I discovered something that stunned me. I tried to look for busts in Kemetic art, and could not find any. There is only one bust and it’s the bust of Nefertiti.

Then I remembered that in my whole life, I had never seen any bust in Kemet. It was more a European thing, like the helmets for example. The Kemites never really used helmets, it was not part of the culture. When depicting people, the artists of Kemet used to depict the whole body, or sometimes just the head, from the tip to the base of the neck. So, the style used for the bust of Nefertiti is quite unconventional.

I decided to look a little bit deeper in the ancient European art to see if I could find any evidence of that feature on busts. And I discovered something really interesting. Many pieces possess that feature. And most of the time they were late copies and not original ones. You can see the evidence with the following piece which depicts “Alcibiades“, son of Cleinias, from the deme of Scambonidae, who was a prominent Athenian statesman, orator, and general.  The statue is supposed to represent an ideal male portrait. A Roman copy after a Greek original of the Late Classical period. The Hermaic pillar and the inscription (“Alcibiades, son of Cleinias, Athenian”) are modern additions. We can see that the feature seem to be related to European art, falsification, copy or modern additions. Erdogan Ercivan is another European scholar who wrote the book Missing Link in Archaeology. He suggests that Borchardt‘s wife was the model for the bust of Nefertiti. Like Sterlin, he also argues about the story of its discovery.

There is also another theory that suggested that the existing Nefertiti bust was crafted in the 1930s on Hitler’s orders and that the original was lost in World War II. In 2009, a CT scan of the precious bust has been done by German scholars. The goal was to see if the external features of the statue were similar to what could be seen inside.

The results showed that a multi-step process was used to create the sculpture. The stucco layer on the face and ears is very thin, but the rear part of the reconstructed crown contains two thick stucco layers. CT images showed several fissures and non-uniform bonding between the layers.

The inner limestone face was delicately sculpted and highly symmetric. Compared to the outer stucco face, the inner face exhibited some differences: less depth in the corners of the eyelids, creases around the corner of the mouth and cheeks, less prominent cheekbones and a slight bump on the ridge of the nose. The ears on the inner sculpture were similar to those visible on the exterior.

Thin-section CT was able to provide detailed images of the inner structure in a completely nondestructive manner and showed the limestone core to be not just a mold, but a skillfully rendered work of art. According to the scholars, the retouching the creases in the corners of the mouth and smoothing the bump on the nose on the outer face may have been the artist’s choice and reflective of the aesthetic ideals of that era.

We can see that the bust does not really represent the true face of Nefertiti. According to the CT scan, the inner face features are more related to the idea that most people have of a black woman. A slight change in the ridge of the nose can completely change the idea that we have of the ethnicity of an individual. Combined to the fact that her nostrils are obviously larger in the inner face, we can go really fast from a white woman to a black woman.

And it’s important to remember that bust was probably dark-skinned if it is an original. According to the pictures taken by the archaeologists when they supposedly discovered it (the images probably came from a late reenactment of the discovery), it was way darker and has been whitewashed slowly through time.

To conclude this I will say that even though German scholars said that it was an original piece of art, we can’t fully believe them. Scholars and media lie and manipulate sometimes. We experienced it with the latest study about the origins of the people of Kemet two years ago.

Germany has too much to lose by admitting that the piece is fake. Admitting that there are a few differences between the inner face and the outer appearance of the bust can be a strategy to legitimize it without admitting the full truth. When they say that these changes have been decided by the artist, they calm the situation and avoid the real questions. It allows them to still use the bust for their museums.

But the problem is deeper than just museums as we talked about it previously. There is a whole universe that has been built around that fantasy. Many businesses and industries are based on that face. And admitting that it is not the true face of the queen will probably force them to make changes into their businesses that the world is probably not going to easily accept because of racism.