For centuries, it was thought that the Pyramids of Giza, one of the world’s most iconic and mysterious structures, were built by slaves. Many people still believe that story today, but new evidence suggests otherwise.

A few years ago, a series of tombs dating back more than 4,000 years were discovered in the backyard of the Giza pyramids. Inside these modest, three-meter-deep shafts were the perfectly preserved skeletons of pyramid builders, along with jars that once contained beer and bread for the workers’ afterlife.

According to Egypt’s archeology chief, Zahi Hawass, these tombs, which date back to the 4th Dynasty (2575 BC to 2467 BC) when the Great Pyramids were built, provide evidence that refutes the long-held belief that the pyramids were built by slaves. Instead, Hawass says that the workers were paid labourers who came from poor families in the north and south of Egypt. They were respected for their work, and those who died during construction were given the honor of being buried near the pyramids of their pharaohs.

“No way would they have been buried so honourably if they were slaves,” Hawass said.

While the tombs contained no gold or valuables, they offer a glimpse into the daily lives of the pyramid builders. Hawass said that the workers ate meat regularly and worked in three-month shifts. It took 10,000 workers more than 30 years to build a single pyramid, a far cry from the 100,000 slaves that the ancient Greek historian Herodotus wrote about after visiting Egypt in the 5th century BC.

But while they were not slaves, the pyramid builders still led a hardworking life. Their skeletons show signs of arthritis and their lower vertebrae indicate a difficult existence. Still, their proximity to the pyramids and the manner in which they were buried in preparation for the afterlife show that they were respected members of society.

“Their bones tell us the story of how hard they worked,” said Adel Okasha, supervisor of the excavation.

This discovery, along with the graves of pyramid builders found in the same area in 1990, sheds more light on the lifestyle and origins of the people who built these ancient wonders. It also helps to debunk the myth that the pyramids were built by slaves, a narrative that has been perpetuated for centuries, and one that has been reinforced by Hollywood films. 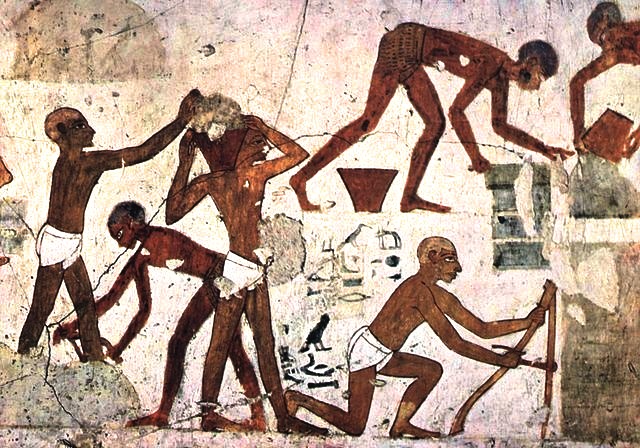 The discovery of these tombs adds to our understanding of one of the world’s most iconic structures, and provides a glimpse into the lives of the people who built them. It’s a story that’s worth telling, and one that helps to rewrite history.

I was particularly interested in the appearance of a skull identified in one of the tombs. Upon examination, it became clear that the skull exhibited traits commonly associated with tropical Africans, including a large nose root and prognathism. Traits that have been observed on Ancient Egypt’s most ancient inhabitants like the Badarians or also on the Great Sphinx located right next to the pyramids for example.

This finding is significant as it suggests that Black Africans were builders of the pyramids.

Further analysis of the remains will be necessary in order to confirm and expand upon these initial observations. However, this discovery adds to the growing body of evidence that suggests the pyramids were built by indigenous Africans who were paid for their labor, rather than the slaves of popular imagination.