Tutankhamen, mostly known for being Kemet’s boy king and son of the revolutionary ruler, Akhenaten, died at a very young age. The tragic death of his father precipitated his accession to the throne. And that’s also what made him special. He is the boy who became king for most people. But that situation was not really uncommon because many other kings in the history of Kemet accessed to the throne while they were still children. Pepi II Neferkare for example. But what really interests us here is not his early access to the throne, but his early death. Indeed, the young King Tut died when reaching his majority, at 19 years old. In other words, when he was becoming a man. And that unexpected and early death led to all types of theories. We will study each one of them and try to discover what really happened to him.Among the several theories that fed mainstream media, 4 of them have been taken seriously by scholars. 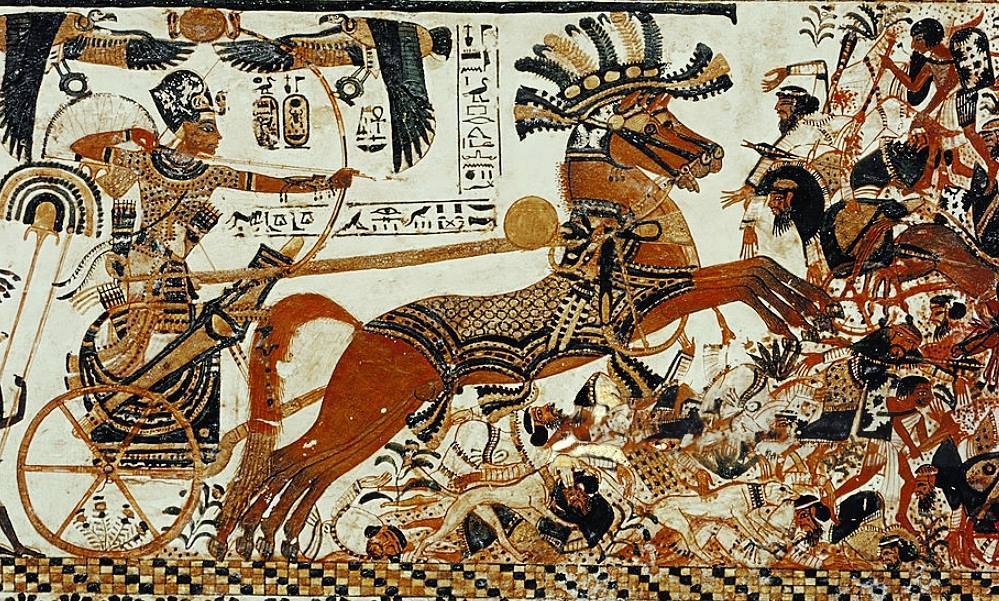 In 2014, producers of a BBC television documentary postulated that King Tut died in chariot crash that broke his legs and pelvis, and resulted in an infection and perhaps death by blood poisoning. Those who supported this theory noted that Tut was depicted riding on chariots and also suffered from a deformed left foot, making it possible that he fell and broke his leg. But Christopher Naunton, an Egyptologist and former head of the Egypt Exploration Society admitted that they did not really know how Tutankhamun died. The BBC documentary started from the premise that the mummy showed evidence of the king having suffered severe trauma to his left torso and side. The filmmakers commissioned research that showed that this kind of injury could have been caused by the impact of a chariot wheel, but not by a fall from a chariot. But according to the French Paleopathologist Philippe Charlier, the injuries on King Tut’s mummy occurred long after his death. It was probably the result of a poor mummification process.

The Marfan’s syndrome & the Malaria theories

Many researchers, academics and amateur Egyptologists have come up with medical conditions that could have been related to the boy king’s ancestry. In most cases, however, the evidence was interesting but not compelling. One of these theories was developed after the CT scans of Tutankhamun’s mummy. Scholars noticed that the young King had a cleft palate and fairly long head, as well as a curved spine and fusion of the upper vertebrae, which are also known to be conditions associated with Marfan’s syndrome. But DNA tests in 2010 proved negative for that diagnosis.

Zahi Hawass the Egyptian archaeologist and his team also suggested that the vascular bone necrosis in conjunction with the malarial infection was the most likely cause of death in Tutankhamun. But caution must be taken when interpreting the cause of death in that mummy. Yuya and Thuya the grandparents of Tut had malaria too, and both individuals had reached an advanced (for the time) age of approximately 50 years or older.

Most people that are exposed to malaria pathogens over a king period of time, develop a partial immunity against it during their lives. So, not every person infected with P falciparum becomes gravely ill. So, it is difficult to believe that Malaria was the cause of King Tut’s death.

Some researchers pointed out the fact that a few limited servants could have been responsible for his death. And their motives could have been likely centered on greed or the changing environment Akhenaten (King Tut’s father) had created upon his death. Akhenaten was a revolutionary who tried to impose heavy reformations into Kemet. But the country was not ready to change. The King died in mysterious conditions and his reforms did not succeed. After his death, the priesthood and the aristocracy forced the young Tut to go back to the ancient traditions, what he did without any opposition. According to the Egyptologist Bob Brier, the death of King Tut may be related to Ay his successor. Bob Brier said that Ay killed King Tut out of greed. Ay knew that by killing King Tut he would inherit the throne and become pharaoh. Coincidently, King Tut does die at around 19 and Ay is given the throne. But once again this theory has never been proven.

So, what really happened to Tutankhamen?

In 2010, a group of scholars said that King Tut was probably killed by the inherited blood disorder called sickle-cell disease. Today, the average life expectancy in the developed world is 40 to 60 years. But in the ancient world life expectancy was really low. It is important to know that the disease is mainly associated to people of black African descent. About 80% of sickle cell disease cases are believed to occur in what is called Sub-Saharan Africa… The results were published in JAMA, by Christian Timmann and Christian Meyer of the Bernhard Nocht Institute for Tropical Medicine in Hamburg, Germany. They suggested that Zahi Hawass’s observations about other diseases could be explained much more elegantly by a diagnosis of sickle cell disease (SCD). But the letter is no longer available on most websites, and no further information can be found about it… People with Sickle cell disease carry a mutation in the gene for hemoglobin which causes their red blood cells to become rigid and sickle-shaped. A single copy of the sickle-cell gene confers increased immunity to malaria, so it tends to be common in areas where the infection is endemic – such as ancient Egypt. People with two copies of the gene suffer severe anemia and often die young.

Timmann and Meyer point out that SCD is the most common cause of bone damage like Tutankhamen’s. The deformed blood cells block capillaries, preventing oxygen from reaching bone tissue. Tutankhamen’s parents are thought to be related, boosting the chance that they both carried the sickle-cell gene.People with SCD can still carry the malaria parasite in their blood, despite their increased immunity. In King Tut’s case, such an infection could have triggered a fatal “sickle cell crisis” in which his essential organs were starved of oxygen, Timmann says.

Members of Hawass’s team describe the suggestion as “interesting and plausible” and say that they are “currently investigating”. That would presumably require testing Tutankhamen’s mummy for the presence of the sickle-cell gene. Timmann’s lab has developed a test: given access to the DNA, “we could do it in an hour”, he says. But if that is the line the Egyptians are taking, they are going it alone. Timmann says he contacted them, offering to collaborate, but has received no reply…

This could have been a major discovery in Egyptology. But oddly the Egyptian team did not reply. It’s been 9 years now, and nothing has been published about it. If scholars proved that King Tut died of SCD, it could also reinforce what we already know, in order words, the fact that he was a black African man. This type of behaviors is what reinforces our distrust of the Egyptian authorities. Are they hiding something?